In my day-to-day life, I would say that I am fairly organised and tidy (my family might disagree with the latter point, given the chaotic state of my bedroom at times…). It has only been through my work as a Project Worker in St Mary’s Mukhuma Secondary School, however, that I have realised the true value of tidiness and organisation.

Upon our arrival at school, it quickly became clear that St Mary’s faced great challenges with the storage of its resources. In fact, the vast majority of the school’s possessions appeared to be stored in piles and piles of cardboard boxes. At first, I just thought that this was somewhat disorganised, but I had not fully considered the huge detrimental impact that this method of storing resources was having on staff and students alike. 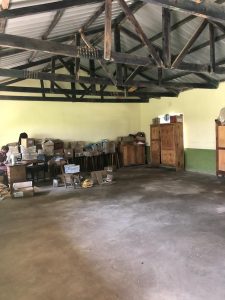 In the library, all of the books lay in boxes. This meant that they were hidden from view, which in turn prevented students from seeing what resources were available to them. As a result of this ‘box’ system, the library was just not functional: students could not browse for books and they relied entirely on the librarian trawling through the masses of boxes whenever they required a specific book. The library was, therefore, the first room on our hit-list of reorganisation. Luckily, the solution was simple: put some shelves up (which is exactly what we did!). This has made an enormous difference; students can now see exactly what books they have access to and are able to swiftly find the ones they wish to read.

Whilst sifting through all the various boxes, we found one hidden away at the top of a cabinet containing an extensive collection of newspapers. These were gathered with the aim of helping students to improve their reading ability in English and Kiswahili, but were never used. It became evident that this was not just a discovery to us, the Project Workers, but also to the students: when I walked into the library one breaktime, there were about forty students all excitedly leafing through the newspapers for the very first time. Hopefully, the new and improved library system will ensure that students will always have access to resources like these. 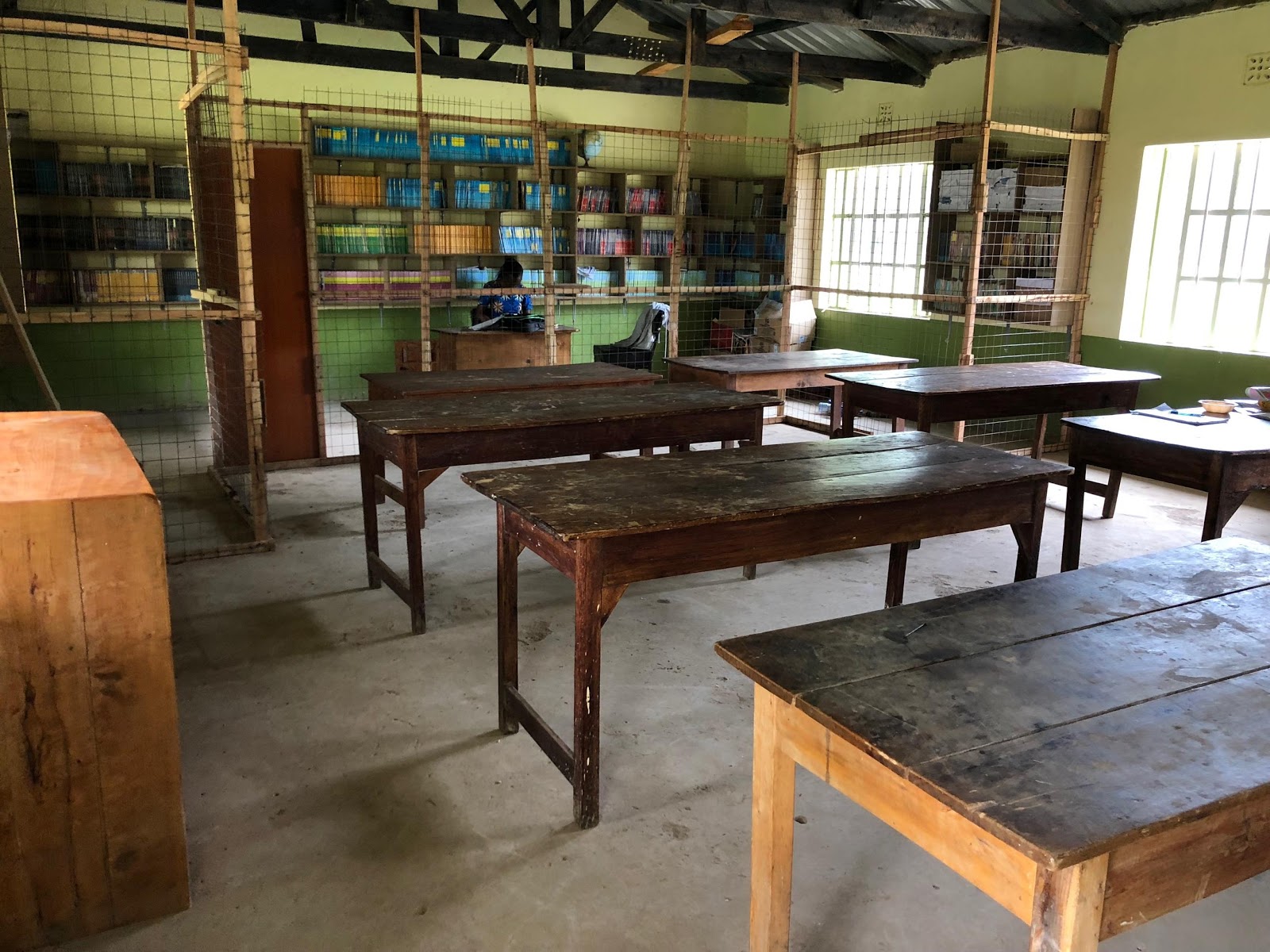 Our next mission was the reorganisation of the laboratory, which, let me tell you, was the one of the most satisfying things I have ever done. As with the library, cardboard boxes were the only method the school had of storing all of its laboratory equipment. Consequentially, equipment was frequently lost and even more frequently broken. Not only was this a problematic waste of the school’s resources, it was an ordeal for the lab technician every time she had to prepare an experiment.

The laboratory storage room itself looked like a nightmarish game of Tetris; boxes of delicate glass equipment perched precariously atop bottles of concentrated acid and the cupboards in the room were so jam-packed that they threatened to burst at the seams. Well, Team St Mary’s are not afraid of a challenge and this was one game of Tetris that we were most definitely not going to lose! 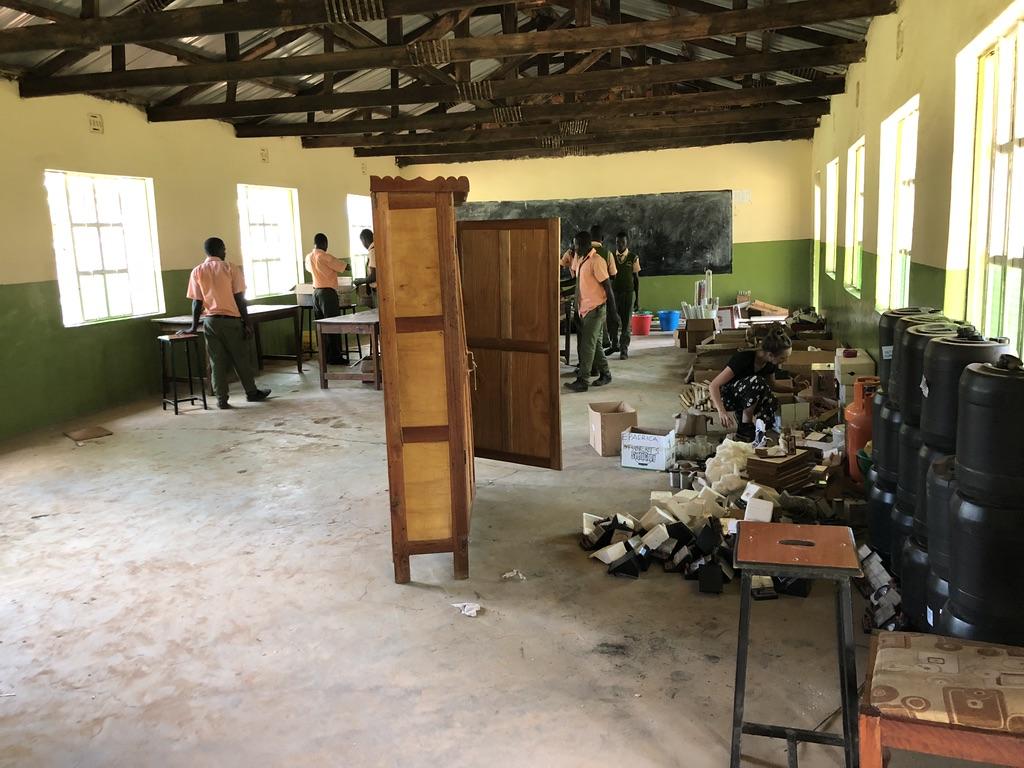 We removed absolutely everything from that room and spent the best part of three days grouping analogous items of equipment, washing glass and plastic apparatus and unearthing the innumerable hidden gems that the school had to offer. One highlight was finding several brand-spanking new gas taps (which we would have otherwise bought more of) stuffed into, you guessed it, another cardboard box!

Once again, shelving was the best option to improve this storage situation. The shelves that we installed, along with implementing a labelling system and arranging all the chemicals alphabetically, have now created a system of organisation that allows the staff and students to quickly find any item they might need for a given experiment.

Some Before, After and in Progress shots from St Mary’s in Mukhuma! @eddy.sidebotham @india_heywood and @darrionnnn have been working tirelessly to help get the school’s laboratory fully stocked and furnished for the beginning of term. Those last two photos of your beautifully arranged lab equipment are too satisfying for words! Brilliant work #epafrica18

Students at St Mary’s Mukhuma enjoying their brand new lab! 🔬📚 “It is really something!” They even managed to get the local MP to pledge to provide their school with running water! 💧 Incredible work @india_heywood and @eddy.sidebotham 🎉 #epafrica18

I have learnt from these projects that organisation is key for education. The issue faced by St Mary’s was not predominantly a lack of resources (although, of course, both the library and laboratory are still in need of more resources), but rather an inefficient use of what the school already had at its disposal. Through the use of shelving over boxes for storage, resources are now stored in the open rather than out of sight. This facilitates easier access to resources and students can make more of what their school has to offer them.

In short, we hope that our projects of reorganisation has meant that the students of St Mary’s School will have to spend less time rummaging through boxes and will have more time to learn and enjoy their beautiful school.