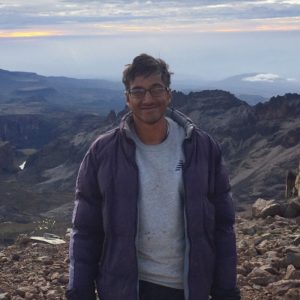 On top of the world (Mount Kenya)

Karthik is a 4th Year Medic at Cambridge, but in summer 2018 he was living in Gambogi in Western Kenya, working with Simbi Secondary School.

In Gambogi I am quickly pegged as a foreigner. When I am out and about, I am generally stared at and have a chorus of onlookers call out “mzungu” to get my attention. “Mzungu” officially meant “white person”, but it’s a broad church and in practice is used to describe or get the attention of “that exotic person who looks out of place that I am quite excited and surprised to see round here”. Initially, I found it strange; coming from a culture where people stubbornly declare colour-blindness, and somewhat alarming: in the UK there is such a fear of causing offence, that people would only really point and shout at someone if they were in imminent danger! Regardless, I’ve reluctantly come to accept my mzungu label appreciating that I and my “bizarre” behaviour is a novelty, and my mere presence is often a a source of excitement and amusement. 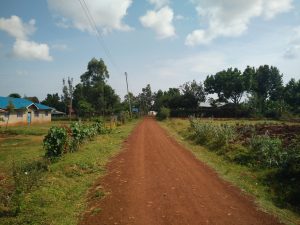 I am now past the halfway point of my time as a project worker at Simbi Secondary,I am beginning to feel – and more importantly, look – “at home”/competent(!) as evidenced by the decline of being called mzungu on the streets.

It seems like a good time to reflect on my experiences for far…. 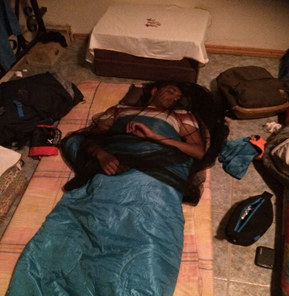 For me there were a lot of “first times” arriving in Kenya from the UK and living simply in a rural community: the scorching equatorial climate is a challenge; the pervasive and baffling passion for tasteless ugali (the staple Kenyan food), and the terminal fear that I might be sucked into the middle of the earth if I fall into the infamous “long-drops” toilets (basically a hole in the ground). We were always told to expect to be out of our comfort zones, but I was still in the dark (and sometimes literally in the dark due to power shortages) about day to day realities. Day to day living here is much more labour intensive than the UK. Things I have taken for granted such as clean water, washing machines and dishwashers are sorely missed in Gambogi. In my accommodation, there is also the added challenge of insufferable cats sabotaging our cooking efforts and stealing food. Cooking on one gas cylinder with no ovens, microwave or kettles is a marathon not for the faint-hearted . Nonetheless, as time has gone on, I am channelling my inner Nigella into my cabbage and noodle efforts. I still miss hot showers though. 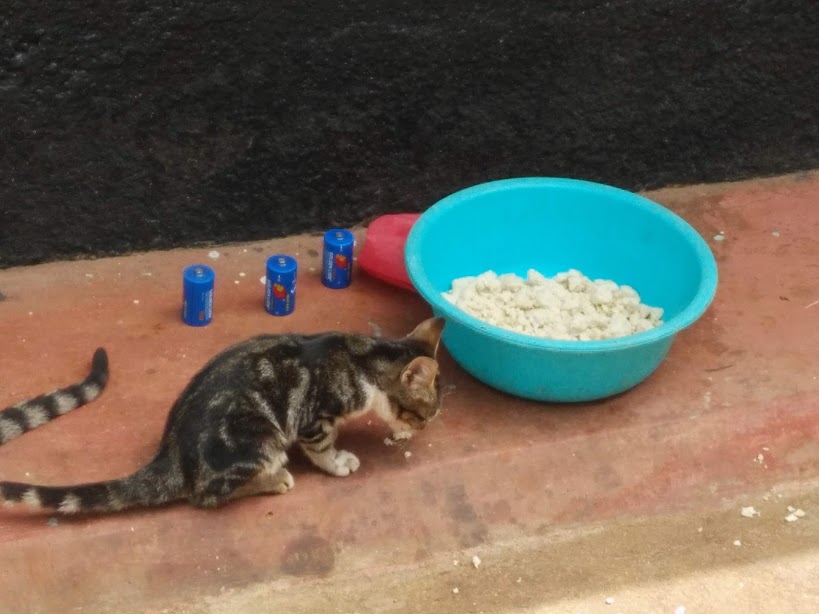 Not as innocent as it looks 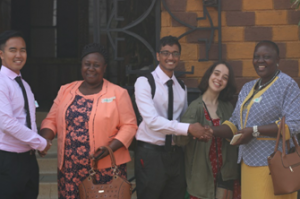 Hizkia, Aida and I are partnered with Simbi Secondary, a school receiving its first year of EPAfrica investment. Simbi’s Headteacher Noel is a force to be reckoned with! On the first day I met her, she adopted me as her “doctor son”. A strong and flamboyant woman, full of charisma and drive, at times it was easy to lose ourselves in her persuasive speech. It was great to have a clear vision and direction about the ambitions of the school from her. As an upcoming school I was excited at the prospect of being able to make a big difference. 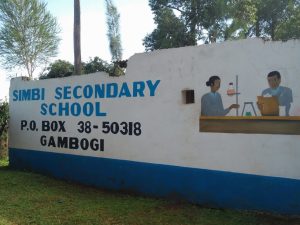 Noel’s main objective was to create a laboratory to allow students to carry out science experiments that are part of their curriculum. Worryingly the existing situation was that students just had to leave the room to wash equipment and had limited/no practice experiments they would have to carry out for their exams. A plan was made with the help of an architect and builder and work on concrete slabs, a water tank and sinks began promptly.

Coming from a more reserved British culture,the high energy behaviour of the Gambogi public including hissing, shouting and endless offers of handshakes took me by surprise. My celebrity status is quite undeserved and I sometimes feel a fraud. The England vs Belgium football match of the FIFA world cup was shown in a jam-packed pub which was rammed with football crazy Kenyans. I arrived at the start of the second half and expected to have to stand at the back. However,an argument broke out between members of the front row. I initially thought this was to do with the football but then people started shouting “mzungu”, it turned out they were arguing about who should vacate their seat to allow me to sit. I admit that I did and still do feel guilty about this attention. Navigating and deciding when and how to decline such extensive hospitality is difficult. However, people’s genuine willingness to help other and openness is always uplifting.

In the UK you can be as obvious or subtle about your wealth as you want: here my mzungu status means the default assumption is that I am well off. It is a dilemma to simultaneously be comparatively wealthy but also to have limited resources meaning I can only invest in one school. Requests for support can instantly change the dynamic of an interaction, and at times it has frustrating for to hear a plea for money after a good-natured conversation. I was once pampered at a church visit with delicious food and excellent hospitality. At the end though, I received a sermon about the poor plight of churches in the region and how because my father must be rich I should donate. Expectations of Mzungu Project Workers and what I am capable of are extremely high – it is generally assumed we are talented and knowledgeable on every subject. As well as often being quite embarrassing, along with our “infinite wealth” can mean a lot of requests. Whilst I have to push back a lot, it is important to understand that there are matters beyond education that also need money and attention.

Another lesson I quickly learned was the prerequisite to haggle…for absolutely everything. As a mzungu who thinks in pounds, it is easy to see any price as cheap. People know this and try and exploit this at every opportunity. I got into the habit of asking people what price to pay before purchasing anything, but this didn’t always work and I’ve definitely paid over the odds sometimes. Haggling can be tiring when your are not in the mood – but there is nothing like the triumph of a persistent haggle, for example when I walked away from a market only for the seller to follow me and give me a Masai shield for less than ten pounds! 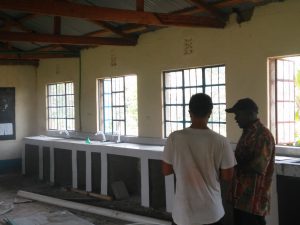 Hizkia giving “clear instructions”….. or not as the case may be!

Upgrading the laboratory has had its highlights and challenges. At times it has been frustrating; when the builder defied clear instructions about what should be built. There has been needless wastage of materials, misunderstandings with our builder and some unnecessary oversights over basic details like creating level surfaces. However, the laboratory has made significant progress and the teachers seem genuinely encouraged. As the building work went on, my project worker trio arranged meetings with NGOs and visited a number of universities to pursue our plans for a health day and a careers day. In the process we have had great experiences such as a nerve-wracking talk in front of a whole university and learning about novel water filtering products. I hope that successful health training and careers days can be implemented sustainability to help positively transform student attitudes to their own well-being and their future. This has taught me that not all changes need money.

When I was first introduced to the students it was an odd feeling. Many of the students in form four (the last year of school) were of a similar age to me. Therefore, being introduced as somebody completely different to them felt wrong. There was a fear that I was not like them at all. A lot of students converted this anxiety into laughter whenever I spoke. I thought this was insulting at first but I slowly realized that it was just a difference in behavior as they didn’t understand me. It was not untiI I took part in football with the boys (much to their amusement and my despair) and sung in Christian Union events that the students realized who I was and what I was doing in the school. A few weeks in, after some classes the students would even ask to talk to me alone, sharing their concerns about the school.

Once, a few students came to visit our house bringing a giant box of home grown sweet potato. Despite some difficulty in explaining how to play the card game “bluff” – the students were convinced I was lying all the time – this was a good opportunity to find out about the students and school. The students opened up about the challenges of balancing home activities such as fetching water and cooking with fitting in time to study. Also, finding out about the disjointed nature of many of their families, with some being orphans was very revealing and saddening.  It made me realise that as project workers it is impossible to solve some of these deep-rooted issues and there are limits to what we can achieve.

Despite having a lot of serious discussions about school with the teachers, its problems and how they could be solved, there has also been time for fun. Unfortunately for me the teachers took great fun at exploring my love life. The teachers’ curiosity for intimate details led me to take the drastic measure of fabricating a story to fulfill their appetite for gossip. I am currently therefore in a long-distance relationship with an avocado seller in Kakamega called Naomi. The longer I spun this lie, the more inconsistencies there were in the story but the teachers still very much enjoyed it.

I’m not as cynical as I thought 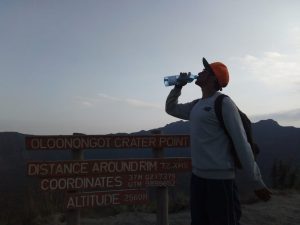 A lot has happened so far and hopefully will continue to. An empty room has transformed into an almost complete laboratory. Students appear to be more confident and open to change from project worker presence. A careers day, health day and changes to school meals are all projects in the pipeline that have support from the headteacher. Although there are accusations that project workers are not the best people to invest money into schools, I don’t agree with this. As a project worker, you have a uniquely unbiased view of the school’s issues. You have more time and energy to focus on issues that sometimes teachers might not be able to act upon. The money is spent through a healthy partnership where fresh ideas from project workers and school know-how from the teachers synergise to benefit the school. It is true that many problems are too big to solve but this does not mean that no attempt should be made. I began as a cynic but over time I have come to the conclusion that EPAfrica’s work, as Kenyans would say “is very much in order”.